Near Chennai, on the behind side of the Chennai Air Port, at a distance of 2 K.m. from pallavaram Railway Station, is situated Pozhichalur, at a distance of 3 K.M. from the aforesaid Railway Station. This village is the only place in the North Tamil Nadu, among the Thondai Mandala Navgraha eremedial place for the Saturn God where is found Sri Aananda valli Sametha Agatheeswarar Temple. This beautiful temple is one among the Navagraha temples of Chennai or Thondai Mandalam Tamil Nadu tourism recently introduced.

Saturn God has different phases like Kanda Sani, Janma Sani, Ezharai Sani. He impacts upon the devotees during the aforesaid periods and gives them ill effects trouble and hardships. To get relief out of these sins, Sri Sani bhagavan, wanting to be relieved of his Dhosam,prayed Lord Shiva for help. Lord Shiva asked Sri Sani bagavan to come to this place and worship him. As directed. Sri Sani Bhagavan came to this place, created a holy pond called "Nallar Sani Theertham" and worshipped Lord Shiva and got relieved of his problems. where in Sani Bhagavan worships God Siva and cleanses himself the sins he had committed to others. As he was relieved of his sins, he is seen in this temple as the prime God- Next to Thirunallar- In the north Tamil Nadu, in Chennai, this is the only temple dedicated to God Sani where in devotees throng in large numbers to get them relieved of the impacts of Sani and this place offers remedy for Naadi Jothidam.

In this temple , when offerings of food is done to God Sani, the crows that are said to be his vehicles come in large numbers and eat the food given to them. During this time, those who want to get rid of the adverse impact of God Sani, gather in large numbers and feed the crows, cattle, dog and get themselves relieved from their sins.

This is an ancient temple in which there is a (swayambu- self evolved) Lingam that had come up of its own. During the 12th century when chozha kings were ruling their land: this temple was built up by our ancestors at a private land which belonged to our ancestors. When the saint Agathiya returned from Himalayas to podhigai mountain: he had stayed here for a short period of time and was offering worship to God. And hence, the deity here is known as Agatheeswarar and the goddess Aananthavalli. There is another specific aspects to this temple: Moorthi, Sthalam, Theertham, all these aspects are combined as one and its importance is well-known.

In this temple, the God is facing the east and the Goddess is facing the South. In the month of Chitirai. Only on these dates 7,8,9 when the sun rises in the east, its rays fall only on the Sivalingam, which is inside this temple and there is a entrance gate to this temple facing North. This temples is managed by Hereditary Trustee in particular family member hailing from vellalar community.

Permission restricted due to
COVID-19 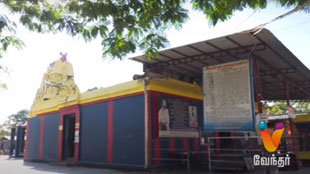